How Does It Work?

Created by the Icelandic Citizens Foundation in October 2011, Better Reykjavik is the City of Reykjavik’s initiative for crowdsourcing solutions to urban challenges. Better Reykjavik uses Your Priorities, open source software to organize and crowdsource ideas. Better Reykjavik is an umbrella for several programs, including the city’s participatory budgeting platform called “My Neighborhood” and the City Council’s participatory lawmaking project is called “Your Voice.” Over 20% of the population of the City regularly uses the platform, which has over 27,000 registered users, primarily for participatory budgeting. The same platform has been used by 20 countries to conduct online engagement.

Through Your Voice, residents of Reykjavik submit original ideas and solutions to municipal-level issues within the city, and vote on proposals submitted by other users. To encourage thoughtful deliberation instead of rancorous debates or “trolling,” the platform uses a “pros” and “cons” feature. Rather than responding to individual comments, residents can make comments either in favor of, or against, a particular proposal, and either upvote or downvote each proposal. The rating scheme can be customized. Your Voices uses a thumbs up/thumbs down rating scale but this can be changed to numbers or stars and include multiple rating systems. For example, when the State of New Jersey used Your Priorities to gather ideas from State employees on how to make the government more effective and efficient, it asked participants to rate ideas based on importance and feasibility using five stars, instead.

In the early days of the project in Reykjavik, on the last working day of every month, a project manager from the Mayor’s Office collected the five top rated ideas with at least 25 upvotes and that were less than one year old. The project manager then evaluated the proposals to determine whether the city had jurisdiction to implement them. If they qualified, the ideas were then transferred to the appropriate standing committee within the city council. The committee then conducted a feasibility analysis. If necessary, professional teams contacted the creators of the idea for further details and customization of the idea. Each idea was then either accepted or rejected.

To make the entire process transparent, every stage of the Mayor’s Office assessment was posted on the Better Reykjavik website. The evolution from an idea to a decision took 3-6 months - at the end of that timeline, all the participants, including the proposer and those who voted for the proposal, were notified about the outcome. If an idea was rejected, the author received an explanation by email, and an invitation to come to City Hall for further discussion, if requested.

Research has shown that crowds of problem-solvers can outperform a company’s internal R&D unit, if one knows when—and how—to use them. But the involvement of a larger number of people is only one reason to prefer a collaborative approach to urban policymaking. A greater diversity of people, with various skills and perspectives, can be just as important, especially when care is taken to go beyond the usual suspects for input. A diversity of participants also enhances the likelihood of obtaining expertise that is more innovative, creative, and varied than the traditional means of public input, such as occasional hearings. Advances in online technology make such deliberative consultation both possible and efficient.

However, despite the initial promise, over time political support and institutional backing in Iceland have waned. Though the Better Reykjavik platform (operated by the Citizens Foundation) is still live, the City Council is not currently processing submissions. City officials believe that having too many initiatives -- participatory budgeting and open policymaking -- means the public does not know which proposals belong where. However, other countries have adopted the platform. For example, the Scottish Parliament is also using Your Priorities to enable public engagement in lawmaking. For example, in 2019 the Committee on Community Well-being solicited citizen engagement in connection with draft policymaking. However, in a current deliberation on whether to legalize civil partnerships for heterosexual couples (currently only gay couples can enter into civil unions) or abolish civil unions altogether, the deliberation feature is turned off, presumably to reduce the amount of discussion. In other words, the deliberation feature can be turned on or off, allowing for greater flexibility and testing of the value and impact of deliberative commenting where people respond to one another’s comments. 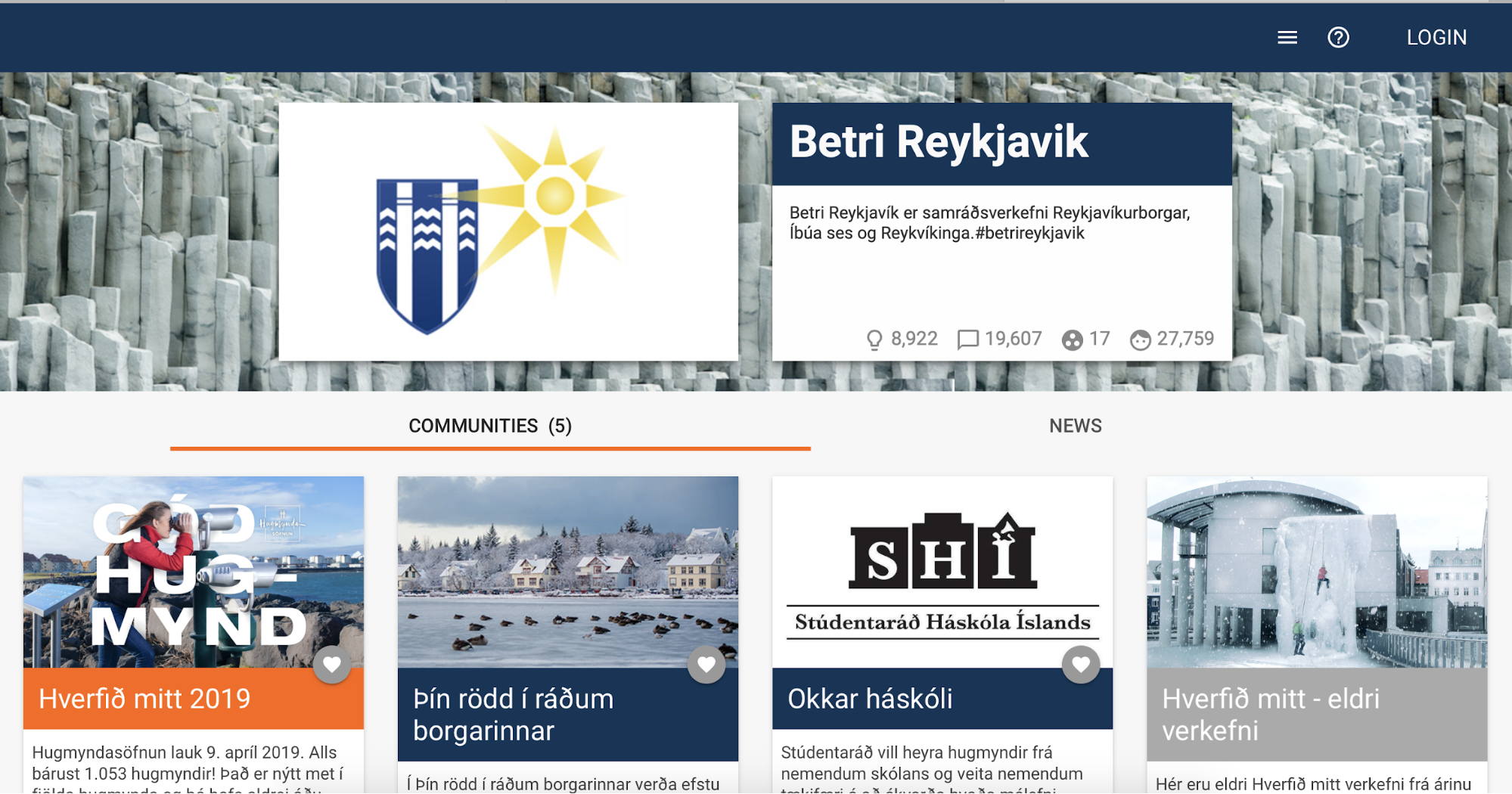 What are the outcomes?

As the Reykjavik City Council retrenches its support, participation has declined. From 6.9% of the city’s voting-age population in 2012, it already dropped to 5.7% in 2014. According to surveys conducted by the University of Iceland, there were many reasons behind the decline of participation: lack of knowledge of the platform, lack of time, lack of interest, and issues with the accessibility of the platform. However, in 2015, participation rates recovered and rose to a record-setting 12.5% participation in 2018. To date, 27,000 registered users have submitted over 8,900 proposals and 19,000 arguments for and against them.

In a 2015 audit conducted by the University of Iceland, just over 40% of Reykjavik residents reported that they were pleased with Better Reykjavik. Interestingly, although the youngest people demonstrated the lowest levels of participation, those who did were the most satisfied with the experience. This dynamic perhaps reflects the demand among young people for more direct forms of democratic engagement.

What does it cost?

The cost of Better Reykjavik from 2011 to 2015 was approximately 1.3 billion ISK ($12 million USD, €10 million) - this includes the participatory budgeting outlay, costs such as the salaries of project managers, advertising and promotional costs, and the €2,500 service agreement with the Citizens Foundation, who operates the Better Reykjavik website. However, this figure does not account for the savings from the innovative proposals or the time of the citizens invested in making them.

What are the benefits?

What are the risks?