As a scientist with experience working alongside US Senators, Ali Nouri, President of the Federation of American Scientists (FAS), knew there were too many times when policymaking failed to make use of valuable scientific advice. Part of the reason, he believed, was that scientists needed to be focused on their research and securing grants to further their work, leaving little time to focus on opportunities to connect with those who make policy and law. He also knew that too often scientific advice could be presented in ways that were difficult for time-poor policymakers to understand and use. He explains

People most effective working on the hill are people who show up - scientists don’t show up. Farmers, for instance, are very sophisticated in dealing with staffers. Then when there’s a soybean crisis, the staffer knows which person to call to help those farmers. For an emerging challenge like COVID, staffers don’t know who to call. Instead, scientists have “fly-ins” where one every six months a bunch of scientists storm the hill for 15 minute meetings and then you don’t see them for another 6 months. That’s not the best way to build relationships. [1]

So in January of 2019, Ali, FAS Senior Fellow Mike Fisher, and their colleagues decided to create a source of nonpartisan advice to Members of Congress through the Congressional Science Policy Initiative (CSPI). FAS recognized that Congressional hearings are a key event where Congresspeople form their opinions on complex scientific and technical issues, but also one where scientists were often not involved. This left lawmakers less informed and less prepared for tasks such as analysing important policy issues and conducting legislative oversight.

In response to this problem, the CSPI aims to facilitate engagement between Members of Congress and scientists, engineers and technologists on issues such as the benefits and risks of emerging technologies like artificial intelligence and synthetic biology, and the role of scientific research in relation to national security and economic competitiveness. For Members of Congress the CSPI provides access to the collective knowledge of a community of scientists from across the nation who, with the support of the FAS, can provide succinct and objective analysis - “letting the data talk” - and who can suggest questions they can ask of witnesses at Congressional hearings. [2]  For scientists, the CSPI offers structured and timely ways they can influence policymaking, by shaping the discussions held during Congressional hearings.

The CSPI targets two main audiences - Members of Congress and their staff, and FAS’s community of scientists.

The process begins when a Congressional Committee initiates a hearing. Typically the committee will send each Member’s office a brief memo with some limited information about the topic and various aspects of the hearing, leaving it up to a Member’s staff to conduct higher level research in order to brief their Congressperson on the topic. The CSPI helps streamline this research process by publishing a page on the FAS website which pulls together reliable information from sources, such as the Congressional Research Service and Government Accountability Office and summarizes the most important points. [3]  They also provide links to other relevant sources, such as news articles, reports, podcasts, and related hearings. Staffers are alerted to this information via email. Consolidating reliable, relevant information in one place makes it easier for staff to digest information and prepare their Congressperson for the hearing.

In the meantime, the CSPI reaches out to their network of scientists to gauge their expertise on the topic and gather ideas for questions. They send a letter to the network’s emailing list with information about when and where the hearing is happening, a description of the topic, and a link to the page on FAS’s website where people can go for more information. As scientists are often unfamiliar with Congressional proceedings, FAS provides information about the purpose of the hearing and why it is important, as well as sample questions that the network can build on. They encourage the network to submit suggested questions for Members of Congress to ask those testifying during the hearing. Scientists can submit questions either through email or a form on FAS’s website. The CSPI then posts those questions to the public website and shares them with staffers for members of the committee to incorporate the network’s suggestions in the line of questions. Most often, a member will simply borrow a question that they like and ask it during the hearing. In some cases, for instance If the Congressperson requests additional information, FAS connects the member with the scientist who posed the question to discuss the topic in greater detail, usually over email or phone. [4]

The CSPI has recruited more than 600 volunteer scientists from across the United States. Ali Nouri and Mike Fisher first developed this network of scientists by working with their personal contacts and expanded it through word of mouth. To grow the network further, the CSPI has worked with university administrators. Ali and Mike have found that many graduate students are interested in getting involved in the policymaking process, making them good candidates for participating in the CSPI. Today, the CSPI is run by a three-person team within the FAS.

In addition to engaging the scientific community in the committee hearing process, in April of 2020 FAS also launched a pilot program to help Members of Congress build advisory councils in partnership with researchers at local universities and other research institutions. The rationale behind this pilot is that since “local researchers are often working on local problems”, working with local institutions can help Congresspeople to better understand and solve the issues most pertinent to their constituents. [5]  In line with the larger goals of the Congressional Science Policy Initiative, FAS will act as a liaison that helps the research community and lawmakers communicate and develop more evidence-based policies.

Through the Congressional Science Policy Initiative, volunteer scientists have contributed information and questions to more than 40 Congressional hearings on topics ranging from clean energy technology to Facebook’s digital currency to testing for COVID-19.

For example, in shaping the conversation around foreign researchers during the Senate’s June 2019 hearing on foreign threats to taxpayer-funded research, the CSPI provided committee members with evidence of the importance of global collaboration and the free and open exchange of information for academic research. This helped to balance out a perspective that foreign born students and researchers were possible threats to national security - a view that had seeped into discussion in political circles. In his opening statement, Senator Ron Wyden read from the testimony of a foreign researcher, provided by a CSPI contributor, and pointed to the many contributions to scientific research made by foreign researchers, taking a strong stance in favor of academic freedom and setting the tone for the rest of the hearing. 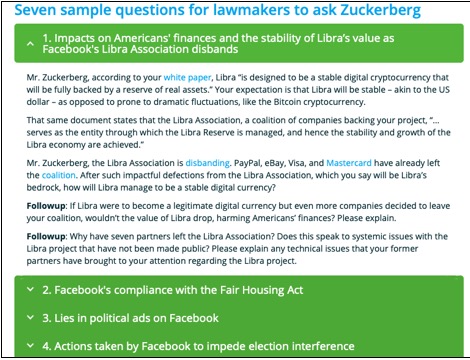 Figure 1: Sample questions for Members of Congress to ask the Facebook CEO as suggested by the CSPI’s community of scientists

In March 2020, the FAS, in partnership with the New Jersey Office of Innovation and The GovLab, also called upon its community of scientists as part of Ask A Scientist. Ask A Scientist aims to counter public misinformation about COVID-19 by offering scientist-led advice to the public about the disease and seeks to ease the burden on government agencies fielding large volumes of generic public enquiries. Using a tool on the Ask A Scientist website, members of the public can ask questions such as “How can I prevent myself from getting the virus?” or “If I get infected when do symptoms appear?” and the tool will serve them answers prepared and reviewed by FAS scientists and an extensive network of volunteers from the National Science Policy Network. Where the tool cannot serve a pre-prepared answer to a question, FAS shares the questions with hundreds of volunteer scientists who draft a response. Ask A Scientist has provided responses to more than 1,000 questions. [6]

Figure 2: The Ask A Scientist website where members of the public can pose questions about COVID-19 and get responses prepared and reviewed by scientists.

[3] See https://fas.org/congressional-science-policy-initiative/hearings/us-response-to-the-covid-19-novel-coronavirus-outbreak/ for an example of one such webpage