From 2011-12, the Brazilian State of Rio Grande do Sul ran Governador Pergunta (“Governor Asks”) to engage citizens in policymaking using the novel “wiki survey” technique. Invented by Princeton professor of sociology Matthew Salganik, a wiki survey presents respondents with a question and then a random series of two answer choices. People select the response they prefer (or “I can’t decide” as a third answer) or they may submit their own response. As people are repeatedly selecting between two options, it is sometimes called “voting.” This pairwise voting is faster and easier than responding to a long survey. People can answer as many or as few questions as they choose and, with enough people participating, the resulting list is a rank ordered list of the answer choices. Then-Governor Tarso Genro used Salganik’s free and open source All Our Ideas wiki survey tool to engage residents (see Fig 1), first, on public health care in 2011 and then on traffic safety in 2012, each over a one month period.

The online approach allowed the State to attract thousands of participants in a short time frame. The 2012 project was Brazil’s largest public consultation of all time with over 100,000 participants. All Our Ideas has also been used in 14,000 citizen engagement projects around the world. Most recently, AARP, the nation’s largest nonprofit used an All Our Ideas wiki survey to engage over 6,000 members in developing policy about big health data in 2019 and the New Jersey State Future of Work Task Force used the platform to engage with workers in 2020. (The new design can be seen in Fig. 2)

The first edition of Governor Asks ran from November 9 to December 9, 2011 on the topic of healthcare, as it had previously been identified as a priority in the state’s participatory budgeting initiative. During the first phase of the process, which ran until November 30, 2011, users submitted 13000 policy proposals to improve public health care. Specifically, citizens were asked to submit proposals according to five themes: Family Health, Comprehensive Care, Urgency and Emergency, Access to Medicines and Health in Your Region.

The platform registered 122,000 survey responses. The authors of the 50 proposals that received the most “votes” (10 from each theme) were invited to meet with Governor Genro and other authorities at Piratini Palace (the Governor’s Office) to further discuss their ideas, a meeting which was live streamed on the Internet. At the outset of the process, the state government agreed that the 50 most voted proposals (10 from each theme) will receive a response from the Government and support the formulation of public policies for health. One example of implementation is shown by a proposal from Ricardo Ferriera, who asked for 24-hour healthcare clinics. In response, the government opened an emergency clinic in Lindóia. Whether the rest of the proposals were adopted or carried out is unknown, but it is likely that some action was produced as the process was repeated shortly after. 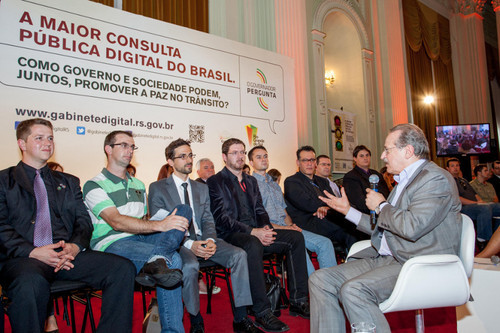 The second iteration of Governor Asks focused on the issue of traffic safety and addressed the question of how government and society can together promote “peace for drivers” (paz no trasito). The goal was to reduce by half the 2,300 traffic fatalities that occurred annually in the state by 2020. As the Governor wrote: “We are breaking down the bureaucratic barriers that exist between the state and the citizens. But changing the reality of traffic depends on a cultural change, which values civilized coexistence over speed and violence ” The 2012 Governor Asks went on to become the largest digital consultation in Brazil’s history. The process followed the same steps as the public health instance, with the only difference being that over 100,000 people participated and cast over 240,000 votes on 600 proposals across five issue areas: Education, Road Safety, Communication, Legislation and Health.

Once this window for submissions closed, users had approximately one week to vote on the proposals, which included suggestions from the government as well as citizen submissions. Once again, the authors of the top voted proposals were invited to meet in person with the Governor. However, this time, the State government committed to implement the top two proposals with the most votes in each of the five categories by 2014. For example, one proposal led to the state creating free bus and metro passes for low income students.

Governor Genro and the team behind Governador Pergunta made concerted efforts to engage the public at every step of both editions. Throughout the entire first iteration, the Governor held meetings and in-person events with civil societies, public health leaders, and citizens in several municipalities, many of which were open to the public. After the window for proposal submissions closed, the Governor’s office launched a major public outreach campaign to encourage people to prioritize the proposals by responding to the wiki survey. To boost participation, in addition to the public events, there was also a “voting van” equipped with computers that drove around to public spaces throughout the state so that residents could easily participate. It is estimated that the van covered 800km in the capital and metropolitan region of the state, encompassing several municipalities. Finally, more computers were even installed in public spaces in the capital along with seven Telecenters where users could respond. Approximately 60,000 people were said to have participated in Governador Pregunta in 2011.

In the second edition of Governador Pregunta, the team increased its outreach efforts. For example, they modified their version of All Our Ideas to be optimized for mobile devices and tablets, making it easier to bring participation to people in public spaces. This modified version was developed in collaboration with UK civil society organization mysociety.org and was funded by a grant from the ICT4Gov Program at the World Bank. In this instance, two voting vans covered an estimated 1500 kilometers over 22 cities. In addition, the state set up more than 150 fixed participation points in public spaces and government agencies. There were also several cities where student organizations mobilized to support the effort. Finally, staff from the Digital Cabinet and State Traffic Committee traveled to speak at various in-person events. These endeavors proved fruitful as the number of participants increased to over 100,000 people. 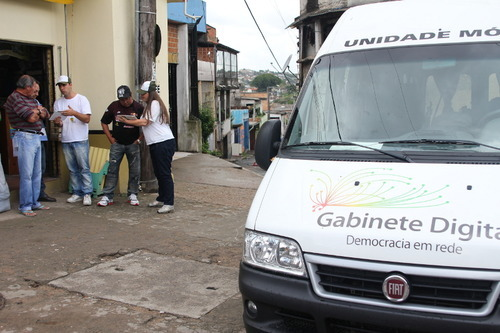 Building on Brazil’s history of successful public engagement experiments, Rio del Sul’s extensive use of wiki surveys to rapidly engage citizens in policymaking demonstrated how it is possible to effectively marshall citizen expertise at scale. There was dramatic growth from the first to the second edition of the program with many lessons for how to market participation opportunities. Unfortunately, there is a dearth of documentation about the ultimate implementation of citizen-written and selected proposals. But the continued and repeated use of this type of pairwise voting or wiki survey tool showcases an alternative for rapid and broad engagement.